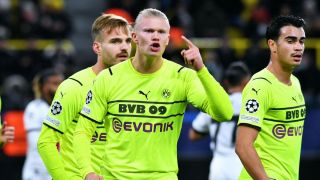 Mino Raiola: “We’ve been thinking about [Erling Haaland’s next move] for two years”

Kylian Mbappe and Erling Haaland are the two hottest properties of this summer’s transfer market. The former’s contract with Paris Saint-Germain is set to expire at the end of the season, while the latter has reportedly agreed a clause with Borussia Dortmund that will allow him to leave the Bundesliga side for a fixed fee.

Real Madrid are interested in the Norwegian marksman, but so are the rest of the European elite. Manchester City and Manchester United seem to be particularly well-poised. Haaland is a rare commodity – still just 21, he’s scored eleven goals in eight games in the Bundesliga this season, and managed to notch a remarkable 74 in 72 since joining Dortmund from Salzburg.

“We’ve been thinking about [Haaland’s next move] for two years,” Mino Raiola, his agent, confessed to Sport 1 as carried by Marca. “We’re not influenced by the market. We can influence the market with a player like Haaland. Really, it’s a second game, parallel to football. There’s two days of matches and five of rumours.”

Dortmund aren’t enjoying a vintage season, a fact that perhaps ensures Haaland will be moving on this summer. They’re second in the Bundesliga, four points behind Bayern Munich, but there doesn’t seem to be a genuine belief they can overhaul the Bavarian juggernaut. They also finished third in their Champions League group, behind Ajax and Sporting Club de Portugal, meaning that they’ll enter the Europa League in 2022.