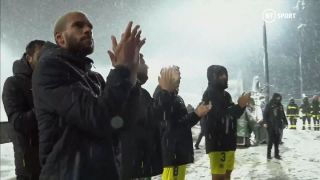 Villarreal travelled to Bergamo this evening to take on Atalanta in a Champions League tie of titanic importance only for Mother Nature to intervene. Heavy snowfall rendered the pitch unplayable, leading to UEFA to decide to postpone the match until tomorrow afternoon. Villarreal’s players made sure to take the time to thank their travelling fans for making the journey.

The Yellow Submarine are second in Group F heading into the game, three points behind Manchester United and one ahead of Atalanta. If they avoid defeat, they’ll make it to the last 16.

Should they lose, however, Atalanta will leapfrog them and secure a place in the second round of the Champions League at the last minute. And the Italian side are in good form – they’re fourth in Serie A, locked in a four-way title race that also includes Napoli, Internazionale and Milan. Villarreal aren’t – they’re in 13th place in La Liga and lost to Sevilla at the weekend.

Villarreal's players thank their away fans for their support after their Champions League match against Atalanta was called off due to heavy snow 👏#UCL pic.twitter.com/4iCgtGbiG9