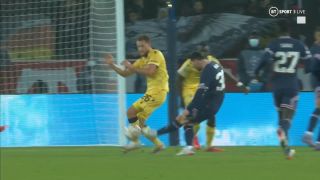 Lionel Messi has scored Paris Saint-Germain’s third goal against Club Brugge in their Champions League tie at the Parc des Princes tonight. Kylian Mbappe scored twice inside the opening seven minutes to put PSG firmly in the driving seat, with Messi’s goal – assisted by Mbappe – coming in the 38th minute.

Lionel Messi becomes the third player in PSG history to score in his opening three home games in the Champions League 🌟#UCL pic.twitter.com/PoJHkQIiiJ

Messi has now become the third player in PSG’s history to score in his opening three home games in the Champions League. The Argentine – who won his seventh Ballon d’Or last Monday – has endured a comparatively slow start to his PSG career since joining on a free transfer from Barcelona in the summer, but there are signs he’s beginning to find his feet and return to his true level.

Another incredible strike in the Champions League from Lionel Messi 😍

It was a goal we’ve seen Messi score a thousand times in the past. He finished with precision after some fantastic work by Mbappe in the buildup. PSG are already guaranteed their place in the last 16 of the Champions League, however. They’re second in their group, on course to finish a point behind Manchester City.