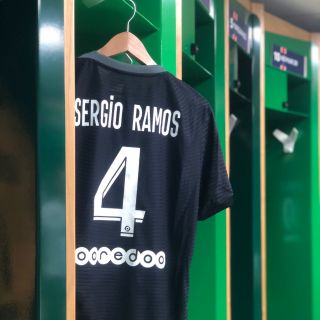 Sergio Ramos is finally in line to make his first start for Paris Saint-Germain after joining the club on a free transfer from Real Madrid during the summer. The French side are away this afternoon, facing Saint-Etienne in Ligue 1.

Mauricio Pochettino has set his team up in a 4-2-3-1 formation, with Gianluigi Donnarumma starting in goal behind a back four of Achraf Hakimi, Marquinhos, Ramos and Juan Bernat. Dani and Idrissa Gueye will sit in a double pivot, with former Barcelona captain Lionel Messi, who also traded Ligue 1 for La Liga this summer, as the number ten. Kylian Mbappe leads the line, flanked by Angel di Maria and another Barcelona old boy, Neymar.

PSG suffered disappointment during the week when they lost 2-0 at the Etihad Stadium to Manchester City in the Champions League, but are pretty much untouchable when it comes to domestic football. They’re top of Ligue 1, eleven points clear of second-placed Nice. Saint-Etienne are second from bottom.