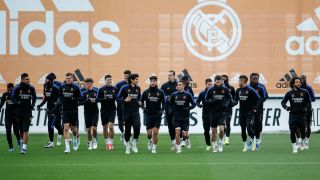 Real Madrid trained this morning at Valdebebas ahead of tomorrow evening’s clash with Sevilla according to Marca. David Alaba, Eden Hazard and Fede Valverde all trained with the group, a boost given the injury concerns facing each of the three.

Alaba sprained his knee during Wednesday evening’s Champions League victory over Sheriff Tiraspol, and is unlikely to start against Sevilla even if he trained today. Ancelotti doesn’t want to risk an increasingly important player, and could instead choose to start Nacho and Eder Militao. Hazard and Valverde, the latter who’s been out for six weeks, could play.

Madrid have wrestled first place in the league table from Real Sociedad, and go into the game a point clear of the Basque side with a game in hand. Sevilla are just a point behind La Real and also have a game in hand, so this one is a very big fixture indeed.