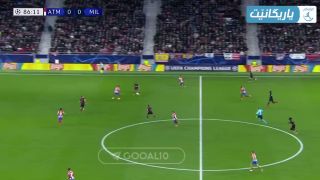 Watch: Milan take a late lead against Atletico Madrid at the Wanda Metropolitano

Atletico Madrid welcome Milan to the Wanda Metropolitano this evening for a crucial Champions League clash. The hosts went into the tie third in Group B, three points clear of Milan, one behind Porto and eight behind Liverpool. If they can win and Porto drop points against Liverpool, a place in the last 16 is theirs.

Los Rojiblancos have misfired so far this season. They’re fourth in La Liga, the title they won last term, two points behind Sevilla, three behind Real Sociedad and four behind Real Madrid. Milan are second in Serie A, level on points with first-placed Napoli.

🇧🇷 JUNIOR MESSIAS, WHAT A TIME TO SCORE YOUR FIRST GOAL!pic.twitter.com/YvnemiwGec

Despite home advantage, Atletico failed to break down their visitors from the north or Italy and it was Milan who were the better side for much of the game. It was also them who struck first blood in the 87th minute, with Brazilian forward Junior Messias powering home a header after a cross from the left.