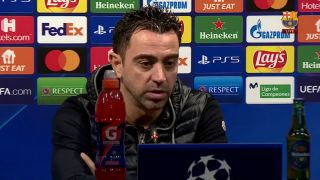 Xavi: “We are Barça and we’ll go to win in Munich and everywhere else”

“It was a great game,” Xavi said post-match in comments carried by Marca. “If we had scored a goal, at least, it would have been a great game. Because it was. We got a point that we knew very little about. But being positive, we have one match left. We have to go and win in Munich.

“I think we played very well. They’re getting the idea. We were just missing a goal. In two games we’ve gotten only one goal and it was a penalty. We have to be more effective. We are Barça and we’ll go to win in Munich and everywhere else. We played a great game, despite the scoreless draw. I’m very satisfied with the attitude of my players.”