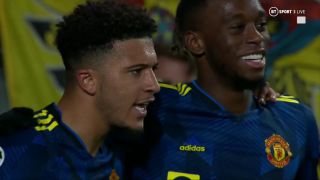 Watch: Jadon Sancho makes it 2-0 to Manchester United at Villarreal in the Champions League

United come into the game having sacked Ole Gunnar Solskjaer on Sunday morning following a disastrous 4-1 defeat at the hands of Watford at Vicarage Road the afternoon before. Michael Carrick has taken temporary charge. Villarreal drew 1-1 with Celta Vigo at Estadio de Balaídos at the weekend.

Cristiano put the visitors ahead in the 78th minute. Villarreal were slack playing out from the back and Fred managed to win the ball before turning it over to the Portuguese, who finished coolly. Jadon Sancho added a second – his first for his new club – in the 90th minute to seal a fine victory, smashing the ball into the top right corner of the net to put the result beyond all doubt.