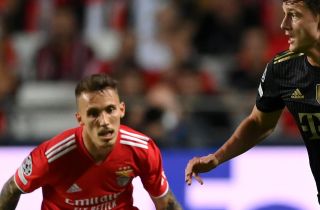 And he got off to a winning start over the weekend as Barca defeated Catalan rivals Espanyol thanks to a controversial penalty.

But his second game in charge will be far more important, with Barca facing Benfica in a crucial Champions League clash.

A win will send Barca through to the knockout stage with a game to spare, while a defeat would leave them likely to crash out of the competition.

And ahead of Tuesday night’s big clash, a former Barca defender in Grimaldo, who played for the club for seven years – although he never managed a senior appearance – has been talking about the possible impact of Xavi.

The now Benfica star told Mundo Deportivo: “I think that the arrival of Xavi could change everything, he could return the confidence that maybe they had lost a little.

“Xavi will give more strength to the team. Also, he will contribute the same ideas as a coach that he had as a player. Barcelona will grow a lot during the year.”