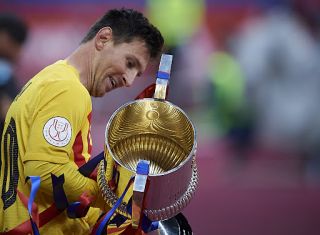 The draw for the first round of the Copa del Rey was made today. None of the clubs involved in the upcoming Supercopa de Espana – Real Madrid, Barcelona, Atletico Madrid and Athletic Club – have been included as of yet. They’ll enter later in the competition.

The first round will be composed of 56 one-off games to be played from November 30th until December second. Perhaps the pick of the ties is a tasty Andalusian derby between Cordoba and Sevilla – two clubs based in cities a 40-minute train journey away from each other – but the early rounds of the Copa are an opportunity for Spain’s minnows to rub shoulders with its elite.

Last season was unique, in that it saw two Copa finals played in the same stadium in the space of a few weeks and you can check out the latest odds on the 2022 winner with some of the best UK bookies’ offers.

Real Sociedad beat Athletic 1-0 in the long-delayed 2020 Copa final before Barcelona hammered Athletic 4-0 in the 2021 Copa final, both games taking place at La Cartuja in the beautiful southern city of Seville.

The latter game was remarkable due to the presence of Lionel Messi. It was the last final the Argentine contested as a Barcelona player, and he certainly turned up to the party. The game was scoreless at half-time before Antoine Griezmann and Frenkie de Jong both scored between the 60th and 63rd minute. Then, with the dam broken, Messi struck. He scored twice in the space of four minutes to ensure the game was over by the 72nd minute.

Employ as many social media managers as you want, but you’ll never carry the weight of a man who just lets his football do the talking, with no need for branded underpants. Don’t think we’ll ever see anyone like Lionel Messi again. pic.twitter.com/6eQhkNMEoS

He celebrated like a madman, overjoyed that he had led his club to silverware in the midst of a trying season. After he lifted the trophy, each of his teammates queued up to get their picture taken with him and the title, partly out of pure admiration and partly due to the fact that they knew it could, and eventually proved to, be the last they’d celebrate with him.

It mightn’t, however, be the last time they celebrate winning the oldest football competition in Spain. Barcelona are the most successful club in its history with 31 titles to their name. Athletic are second in the historic ranking with 23, while Madrid are third with 19. Atletico, Valencia, Zaragoza, Sevilla, Espanyol, Real Union and La Real round out of the rest of the historical top ten.