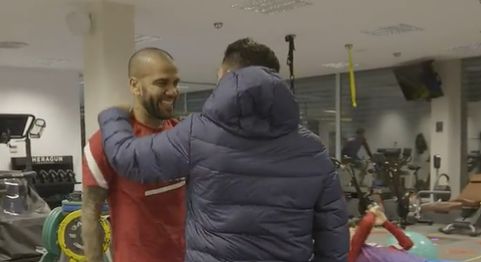 Dani Alves is already training with Barcelona and has already linked up with his new boss.

Alves agreed a deal with Barca to return to the club over the weekend, returning five years after his first departure and at the age of 38.

The veteran full-back won everything there is to win at Barca during the eight years he spent at Camp Nou initially, and he returns as the most successful player – in terms of silverware – in the game.

Alves will bring a wealth of experience and nous to the Barca dressing room with new boss Xavi Hernandez taking the opportunity to add another leadership figure.

Xavi and Alves worked together for eight years previously, and they shared a warm embrace on Monday night.

Alves took part in light training on Monday evening after completing his medical earlier in the day, and during his session in the gym, the Brazilian shared a warm hug with his former teammate and new boss.

You can catch the moment on the tweet below.