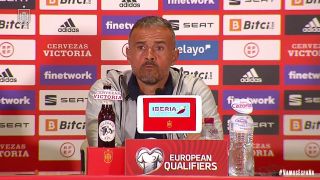 Luis Enrique on the night after big games: “I can’t sleep even if I get drunk”

La Roja face Sweden this evening in a do-or-die World Cup qualifier at La Cartuja in Seville. If they draw or win the game, their place in Qatar is secured. If they lose, they’ll have to navigate a tricky playoff system to make it to the Middle East.

Spain beat Greece in Athens on Thursday night 1-0 thanks to Pablo Sarabia’s first-half penalty, while Sweden suffered a shock 2-0 defeat at the hands of Georgia in Batumi.

Luis Enrique, who’s had to field quite a lot of questions during the course of the week about the pressure he and his team are under, revealed an entertaining fact about his sleeping pattern in his pre-match press conference on Saturday evening.

Quite liked this little insight into Lucho’s sleeping patterns.

The night before a game he sleeps like a baby. 👶🏻

The night after he can’t sleep at all even if he gets drunk 🍻🍷🥃 https://t.co/jRFm7NCnN8

“Before as a player and now as a coach the same thing happens to me,” the Asturian said. “The night before the game I sleep like a baby but afterwards I can’t sleep even if I get drunk.”

Luis Enrique has built a very strong team. Spain made it to the semi-final of Euro 2020 only to lose to eventual winners Italy, and lost the final of the Nations League to France last month.