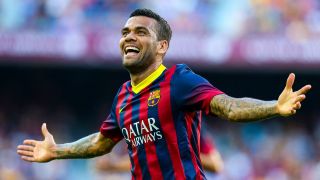 Dani Alves has returned to Barcelona. The Brazilian right-back, considered by many to be the best to have played his position in the history of the game, will begin training with Xavi’s first team immediately although he’ll have to wait until January until he can make his long-awaited second debut for the Catalan club.

It’s safe to say the 38-year-old is happy to be back at Camp Nou, note Marca. He posted an image on Instagram shortly after the news became official on Friday evening, accompanied by a heartfelt caption detailing his unbridled joy at the development.

“Almost five years of fighting like a madman to get to this moment,” he wrote. “I didn’t think it would take that long, I didn’t know it would be so difficult, but I knew inside my heart and inside my soul that the day would come.

“I’m coming home, from where I’ll never leave. And as I said before leaving, I’m just one more of you. I don’t know how long that dream will last, but may it be eternal while it lasts! See you soon in that most fascinating place, with the same enthusiasm as the first time to help rebuild the best club in the world. I’m coming back home, culers!”

Alves left Barcelona in the summer of 2016 to join Juventus, spending a solitary season in Turin before linking up with Neymar at Paris Saint-Germain. He spent two years there before returning to Brazil to play for Sao Paulo, the club he supported as a child.

Alves spent two seasons back in Brazil before rescinding his contract after a financial dispute. During that time, he led Brazil to a gold medal at the Tokyo Olympic Games, becoming the most decorated footballer to ever play the game in the process.