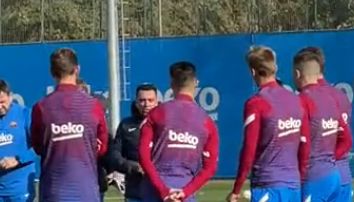 Xavi Hernandez is already working with the Barcelona players following his appointment.

The Blaugrana legend was announced as the club’s new head coach over the weekend ahead of being officially unveiled to fans at Camp Nou on Monday.

Xavi has spent the last six years with Qatari side Al-Sadd, and for two of those, he was the head coach.

He now makes the big step up to Barca as he looks to help his former club recover from their current crisis, on and off the pitch.

Given Xavi’s stature at the club having won everything there is to win at Camp Nou as a player, fans are very excited to see him return.

And today, he took his first training session at the club.

The session only featured a handful of senior stars, with only five senior players fit and not on international duty, but Xavi is sinking his teeth nonetheless.

And below you can see some of the best photos and videos that have emerged from the session so far.