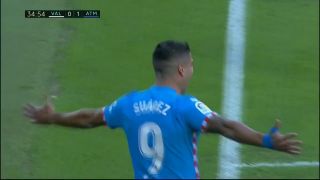 Diego Simeone’s men were looking to bounce back from their disappointment in the Champions League during the week, when they were beaten 2-0 and outclassed by Liverpool at Anfield.

Atletico were fourth going into the game, two points behind Sevilla in third, three behind Real Sociedad in second and five behind leaders Real Madrid.

Valencia were down in eleventh, although in the knowledge they could leapfrog Espanyol and Barcelona and go eighth should they win. Los Che beat regional rivals Villarreal 2-0 last weekend.

Atletico took the lead in the 35th minute.

Antoine Griezmann and Angel Correa combined beautifully before threading a through ball into Luis Suarez. El Pistolero was customarily clinical, finishing coolly to score his seventh goal of the season.

Atletico dominated the game from the first whistle. They saw more of the ball and were more accurate in their passing, while Valencia offered very little going forward.