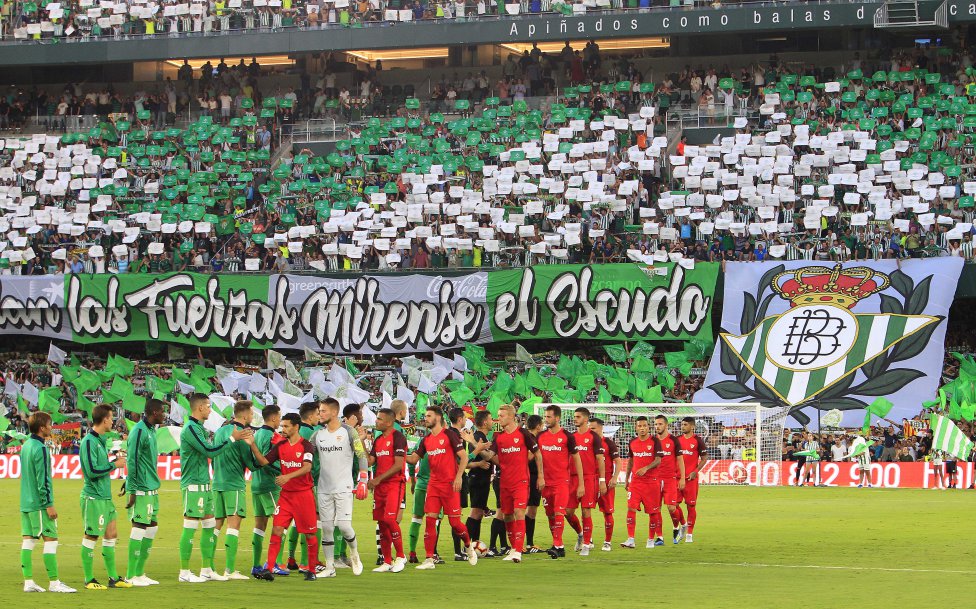 If you were to ask which of the two Seville sides comes into this game in best shape, it would be hard to give a clear answer.

One response could be that all form goes out the window for a game of such intensity and ferocity anyway. No team wants to lose this match and, right now, neither side can afford to.

Sevilla come into this ahead in the league table, three points clear of their eternal rivals. They have been perfect at home in La Liga so far, winning all five games at the Sanchez-Pizjuan.

Their only defeat came in another Andalusian derby, at Granada, in a game they felt they really should have won.

Real Betis have also made an encouraging start – their best for a number of years – but suffered a damaging 3-0 defeat against Atletico Madrid last weekend.

El Gran Derbi. Two clubs that represent different sides to the football-crazed city of Seville. A place where, despite the physical beauty of the city and its inhabitants, football becomes the only thing that matters once the first whistle goes. Te echo de menos, Sevilla. pic.twitter.com/8C3bwFd5sS

However, both sides are under enormous pressure from their fans to win this game after terrible results in Europe midweek.

Sevilla lost at home despite taking an early lead and are rock bottom of their Champions League group, just about clinging on to the chance of qualification.

Sevilla have failed to win any of their first four matches (drawn three, lost one) and have scored just three times in the competition, two of which were Ivan Rakitic penalties.

In the Europa League, Los Verdiblancos are in a much healthier position to qualify but were humbled by Bayer Leverkusen, hammered 4-0. Their qualification now depends on staying ahead of Celtic, with the Glasgow side just one point behind them now.

Although much of the damage was inflicted on the break and late in the game, it equalled their worst result under Manuel Pellegrini, and is also their joint-worst defeat in Europe. Not the kinds of records you want going into the biggest match of the season.

It is worth reflecting on the fact that Betis losing two consecutive games is seen as big news these days, a testament to the improvements made under the Chilean head coach.

Before his arrival, Betis were a defensive shambles and frequently lost back-to-back matches. The strides made cannot be underestimated.

At the Benito Villamarin, Betis have only won one of the last 15, proving that home advantage does not count for as much as you might imagine. Furthermore, Julen Lopetegui is unbeaten in his four Gran Derbis, with three wins and a draw.

Nabil Fekir will be aiming to be one of the leading protagonists for this match. He was left out of the defeat at the Wanda Metropolitano, and Thursday revealed why Pellegrini was justifiably cautious. Sitting on four yellow cards, another against Diego Simeone’s men would have ruled him out of El Gran Derbi.

On Thursday night, he let his emotions get the better of him. Repeatedly targeted and fouled, yes, but he has to learn to control his temper in moments like that. The mercurial Frenchman will surely be determined to leave a positive mark on this fixture after a frustrating week.

The two elder statesmen of the fixture will not be the headline acts this time around. Sevilla captain Jesus Navas sustained a muscle injury against Lille and is definitely out. 40-year-old Betis winger Joaquin started in the Europa League in Germany on Thursday, so is likely to only be on the bench to begin with.

Both coaches will come under even more scrutiny and pressure if they were to suffer defeat on Sunday night. Demanding fan bases will not want to have to endure the international break with their neighbours basking in the glow of success.

For that reason, Lopetegui and Pellegrini – pragmatic at the best of times – will probably work not to lose as the basis of their respective gameplans.

Therefore, a tight, cagey draw is perhaps the most likely outcome for this game. Whatever the result, it will be an intriguing encounter and will shape the direction of the narrative for these two enormous clubs.