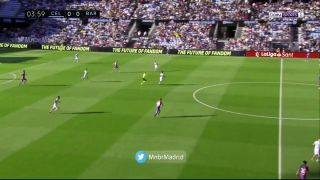 Watch: Ansu Fati scores out of nothing to send Barcelona into lead at Celta Vigo

What a beautiful goal by fati 🔥pic.twitter.com/kokfsmwARU

Fati also delivered the decisive goal during Barcelona’s pivotal 1-0 win against Dynamo Kyiv in the Champions League during the week. He’ll be integral to Xavi’s Barcelona moving forward.