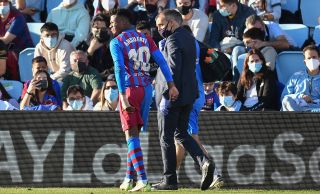 Fati was forced off in the first half in Galicia after pulling up in chasing a loose ball with La Blaugrana fans fearing the worst over the La Masia starlet.

The 19-year-old has missed the majority of the last 12 months with a serious knee injury, but he has four goals on his return to action in 2021/22, including a fantastic opener against Celta Vigo.

Barcelona have now confirmed a hamstring muscle injury following tests by the club’s medical team after the game.

The club have not placed an estimated time on his recovery with initial estimates hinting at a period of five weeks on the sidelines.

Fati has also been withdrawn from the Spain squad for their 2022 World Cup qualifier double header, with Espanyol star Raul de Tomas called up as his replacement ahead of a possible international debut for him.