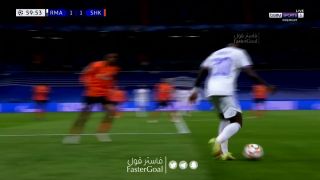 Real Madrid welcomed Shakhtar Donetsk to the Santiago Bernabeu this evening in another Champions League fixture.

The Ukrainians continued to impress at the beginning of the second half, but Benzema scored his second to regain Madrid’s lead on the hour. A slick attacking move ended with Vinicius again teeing up the Frenchman to make it 2-1.