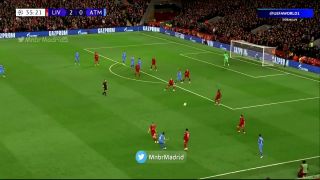 Watch: Felipe sent off for Atletico Madrid at Liverpool

Atletico responded well, but shot themselves in the foot in the 37th minute when they went a man down. Felipe tripped up Sadio Mane to earn himself a yellow card, only for the referee to upgrade it to red when the centre-back ignored him.