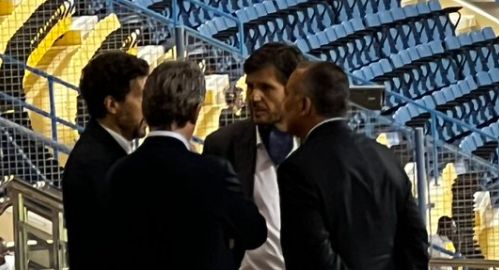 Barcelona chiefs Mateu Alemany and Rafa Yuste have touched down in Qatar ahead of talks with Al-Sadd.

Barca are in the process of trying to lure former midfielder Xavi Hernandez from the Qatari club.

Xavi is expected to replace Ronald Koeman in the coming days after taking charge of tonight’s clash with Al-Duhail in the Qatar Stars League.

A deal must be struck first, hence Barcelona have sent directors Alemany and Yuste to Qatar for talks with Xavi’s current club, but obstacles are not expected at this point.

And ahead of potentially bagging a deal for Xavi, the Barca chiefs will watch him in action.

A picture has been snapped of Alemany and Yuste inside Al Gharafa stadium as they prepare to watch tonight’s Al-Sadd clash.

Xavi will be in charge for the game, likely leading Al-Sadd for the final time after around two years at the club.

Talks between Alemany, Yuste and the Al-Sadd chairman Mohammed bin Khalifa Al Thani are set to follow with the hope a deal can be struck in the next 24 hours or so.