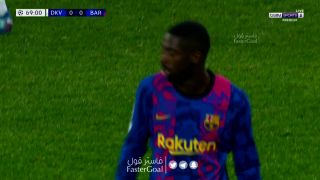 Barcelona travelled to Ukraine this evening to face Dynamo Kyiv in a must-win fixture in the Champions League.

The Catalan club sat third in Group E going into the game, two points clear of bottom-placed Dynamo, one behind second-placed Benfica and six behind pace-setters Bayern Munich.

Barcelona played the opening game of the post-Ronald Koeman era at the weekend, drawing 1-1 with Alaves at Camp Nou. They went into tonight’s contest determined to return to winning ways.

And they started well, playing with more intent and aggression than they have in recent times if still lacking a certain decisiveness in the final third.

Also, by pressing Dynamo so high they left themselves exposed, something their hosts sought to take advantage of with quick, competent counter-attacks.

Nerves frayed as the game wore on, and Barcelona thought they had won a penalty on the hour mark when Ansu Fati was felled in the box. VAR intervened, however, to overturn the decision.

Barcelona finally took the lead in the 70th minute. Oscar Mingueza whipped the ball in from the right side – it fell loose in the penalty area to Fati, who made no mistake in stepping up to the plate and smashing the ball into the back of the net.