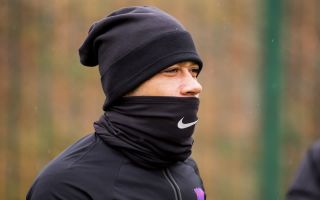 Barcelona travel to Ukraine this evening to face Dynamo Kyiv in a must-win fixture in the Champions League. The Catalan club sit third in Group E, two points clear of bottom-placed Dynamo.

They’re one point behind second-placed Benfica and six behind pace-setters Bayern Munich. If they intend on progressing to the last 16 of this season’s competition, they absolutely have to win.

Barcelona are expected to set up in a 4-3-3, with Marc-Andre ter Stegen starting in goal behind a back four of Oscar Mingueza, Ronald Araujo, Eric Garcia and Jordi Alba.

Sergio Busquets is thought to be in line to anchor the midfield, with Frenkie de Jong and Gavi either side of him. Memphis Depay will lead the line, flanked by Sergino Dest and Ansu Fati.

Barcelona are unable to call upon Gerard Pique, Martin Braithwaite and Sergio Aguero through injury or illness, while Pedri and Sergi Roberto are also doubts.