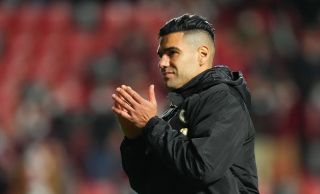 In form Rayo Vallecano were held to a 0-0 draw at home by Celta Vigo with Granada securing an impressive 3-0 win at Levante.

Rayo have looked to make their mark in the top flight in 2021/22 but they could not find a way through in Vallecas.

Andoni Iraola’s side dominated the first 45 minutes with Radamel Falcao, Isi Palazon and Franc Garcia all denied by Matias Dituro.

The visitors did come into it after the restart with Brais Mendez forcing a key stop from Stole Dimitrievski and Dituro again denied Garcia.

In the other Monday night game, Granada secured their first away victory of the campaign with a ruthless showing at Levante.

The away side dominated the start at the Estadio Ciutat de Valencia with German Sanchez heading them in front before Luis Suarez doubled their lead just before the break.

Granada get a fast start against Levante 🔥 pic.twitter.com/gUhgkG0Hv4

Levante showed signs of life after the restart but Antonio Puertas’ fantastic solo strike sealed all three points for Granada.

Antonio Puertas adds to the Granada lead with a nice individual effort! 👏