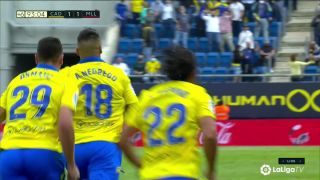 Cadiz rescued a point against Mallorca on Sunday afternoon courtesy of a last-minute equaliser from Alvaro Negredo.

Iddrisu Baba put the visitors from the Balearic Islands ahead in the 29th minute, only for things to go awry in the second half.

A nerveless penalty from Alvaro Negredo! 🥶

An injury time equaliser from the spot for Cadiz 🟡 pic.twitter.com/gkKq3tp8mx

Negredo stepped up to take the penalty in the 94th minute, and as you’d expect from a man of his experience he made no mistake. He went for the left side decisively and the ball nestled in the back of the net.

The result it big for Cadiz. It leaves them outside the relegation zone in 17th, a point clear of 18th-placed Granada.

Mallorca will be disappointed to throw away another lead days after they did the same with Sevilla. They’re 12th in the table.