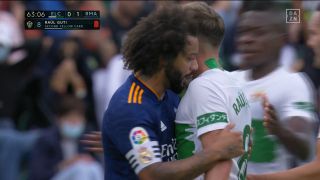 Watch: Raul Guti sent off for Elche after poor challenge on Toni Kroos