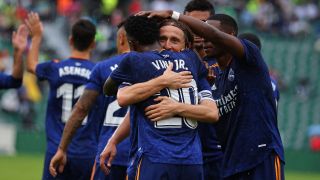 “Things are working out now, it’s true, but it’s work that I’ve been doing since I arrived in Madrid,” Vinicius said in comments carried by Marca on the final whistle. The Brazilian has exploded so far this season. “I want to continue helping my team until the end.

“Sometimes you have work hard in chasing the ball. It was a difficult trip but we were calm both in attack and defence. All my teammates were very important [in helping him score his brace]. Before the game, they told me they’d find me with a pass.”