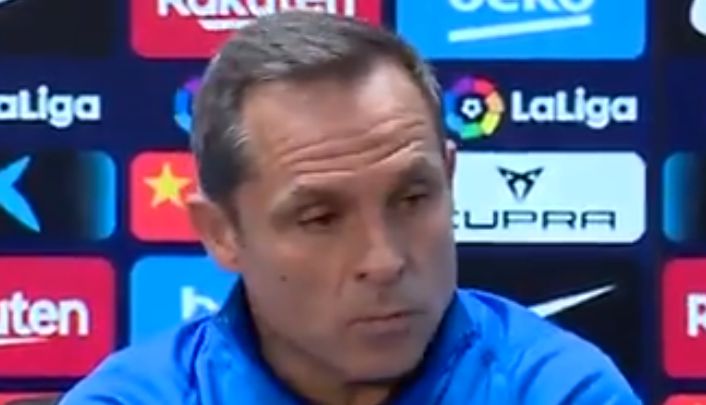 Sergi Barjuan has spoken for the first time since taking interim charge of Barcelona.

The former Mallorca boss was appointed as Barca‘s interim coach on Thursday after Ronald Koeman was sacked.

Koeman spent just under 15 months in charge at Camp Nou before eventually being sent on his way amid a disappointing start to the campaign.

A Clásico defeat followed by a loss to Rayo Vallecano was the final cause, and the search for a replacement has already begun.

Xavi Hernandez looks as though he will be the man, but until a deal is agreed, Barjuan will take charge.

It’s expected Barjuan will take charge of games against Alaves and Dynamo Kyiv at the very least, with Xavi not expected to arrive until next week, and the Barca B team boss has now spoken for the first time.

“Firstly, I’d like to give my thanks to the club for the confidence they have showed in me,” he said in his opening press conference.

“Secondly, I want to send a big hug to Koeman because we have worked side by side these months.

“I arrive in a complicated situation, but we are already working. It’s easier to work with players like them. I have liked what we have done today.

“We have to try to get everyone plugged in, that is difficult. We have to be all together, the people that are coming to the game tomorrow.

“The style of play will not vary, but maybe some tactical concepts could provide the solution.”

Barjuan added: “I am a winner and we have to reverse the situation. If I have to interviene in situations for the best of the team, I will do it.

“Tomorrow we have to win the game because La Liga is open. We cannot fail to get points and especially not at home. We have to recover the idea of direct football.”