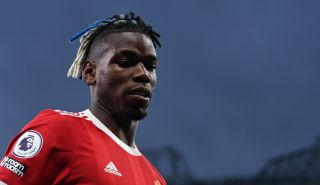 Real Madrid may yet make a move for Manchester United midfielder Paul Pogba.

Pogba has been linked with Los Blancos on and off for a number of years, but this summer, the Frenchman could well be on the move.

As things stand, Pogba will leave for free this coming summer with his contract at Old Trafford meandering towards its end.

The Reds have been key to extend the midfielder’s deal, but amid a lack of game time of late and an apparent breakdown in relationship with Ole Gunnar Solskjaer, who himself is under serious pressure, Pogba now looks more likely than not to leave.

And according to Mundo Deportivo, Real Madrid are monitoring the situation.

Los Blancos are focused on the signing of Kylian Mbappe ahead of next summer, but that doesn’t mean their interest will end there.

Pogba is a very big opportunity given the lack of transfer fee, and that makes it a situation Real Madrid are said to be interested in.

Though, they won’t be the favourites, and given they will have to pay Mbappe an eye-watering wage, it might come down to whether they are willing to do the same for Pogba with the likes of PSG likely to put up big offers.

As things stand, Pogba will be free to negotiate a pre-contract agreement with any team outside England from January 1.