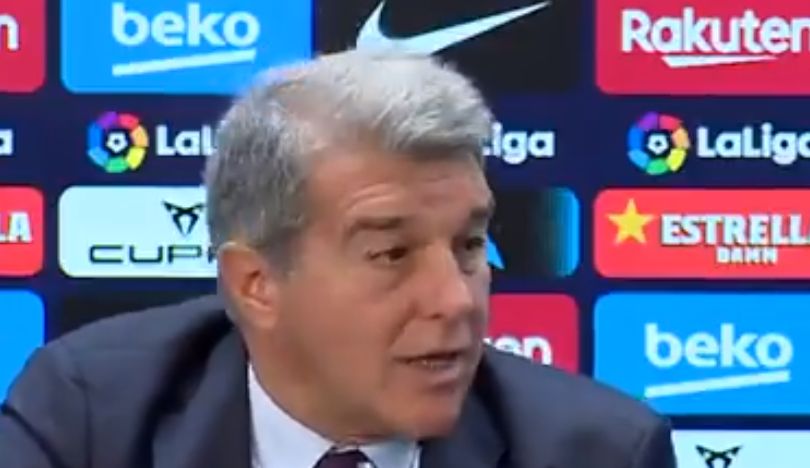 Barcelona president Joan Laporta says there are ‘other candidates’ beyond Xavi Hernandez, but he has already spoken with the former Spain international.

Laporta made the decision to sack Ronald Koeman on Wednesday evening following a defeat to Rayo Vallecano, and the search is now on for a new boss.

All arrows point to former midfielder Xavi, who is currently with Qatari outfit Al-Sadd, and it’s clear that he is the leading candidate.

But according to Laporta, he is not the sole candidate in this process.

“From when he left for Qatar, he said he will be the coach of Barca,” said Laporta in today’s press conference. “What I don’t know is when. The information that we have is very good.

“I have not followed Al-Sadd, but all the inputs that we have had are positive.

“He has already taken the step of being a coach and doesn’t have a long career. We speak a lot with Xavi, but I maintain that there are other candidates.”

While there may be other candidates, it is pretty clear that Xavi is the priority, and Laporta has admitted that he spoke with Xavi previously when Koeman’s future was unclear ahead of deciding to give the Dutchman more time.

“It’s a very interesting process,” added the Barca president. “I have very good references from close friends and they know more than me.

“For months, when I gave more time to Koeman, we had spoken with Xavi. I know what his opinion is of the team and what he wants to do.”

While Barca attempt to agree a deal for Xavi, former Mallorca and current Barcelona B boss Sergi Barjuan will take charge.

Barjuan will be in the dugout for a La Liga clash with Alaves and a Champions League date with Dynamo Kyiv.

The Blaugrana will hope to have a permanent boss in place after that second game ahead of facing Celta Vigo away from home.