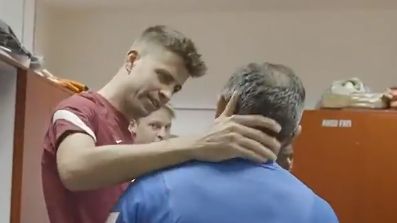 Here are your Spanish football headlines of October 29.

Barcelona’s new interim boss has now met the players for the first time.

Following his appointment, Sergi Barjuan spoke to the players on Thursday before taking his first training session.

Former Mallorca boss Barjuan will stand in until Barca find a permanent solution.

Atletico Madrid were denied all three points by Levante on Thursday night in controversial circumstances.

A harsh handball on Renan Lodi with 90 on the clock saw Enis Bardhi score his second penalty of the game to make it 2-2.

It’s now three without a win for Atletico Madrid.

Elsewhere on Thursday night, Real Sociedad saw of Celta Vigo thanks to goals from Alexander Isak and Aritz Elustondo.

Meanwhile, Granada stole a point from Getafe thanks to a Jorge Molina goal 20 seconds from time.