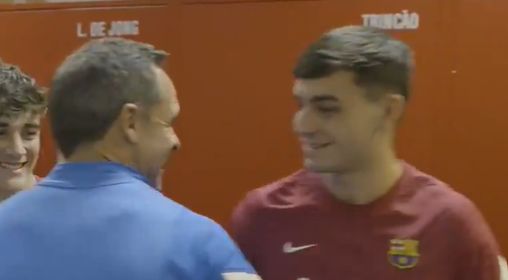 The Blaugrana moved quickly to appoint an interim boss after sacking Ronald Koeman on Wednesday night.

A Clásico defeat to Real Madrid and a loss to Rayo Vallecano proved the final straws for Joan Laporta, and Koeman was sacked on the back of the latter.

It was though that La Masia coach Albert Capellas would step in while Barca searched for a permanent solution.

But in the end it was former Mallorca boss Barjuan, who didn’t do such a good job during his spell with the Balearic side, leading them to the third tier.

The again, he does at least have first-team managerial experience, and it is expected he will only take charge of a few games with Barcelona understood to be in talks with Xavi Hernandez over taking up the vacant role.

In the meantime, Barjuan has linked up with the players and he has already taken his first training session.

As you can see in the video and pictures above, he greeted the players in the changing room at Cuitat Esportiva before taking the afternoon session.

Barcelona are now preparing for a home clash with Alaves this Saturday evening.