Mikel Merino was not impressed with the penalty given against him against Atletico Madrid on Sunday evening.

La Liga leaders Real Sociedad led 2-0 at the Wanda Metropolitano thanks to goals from Alexander Sorloth and Alexander Isak.

But their lead came crashing down after a header from Luis Suarez was followed up by a controversial penalty decision.

With 13 minutes, Suarez miscued a shot in the box, and that seemed to be that, but after a VAR review, it was decided that the Uruguayan had been fouled after taking his shot.

La Real midfielder Merino made contact with Suarez, but the contact was slight, and it also came after the shot had been made, having no impact on how the play played out.

Still, Merino was punished, and Suarez scored the penalty to complete the comeback and take a point. 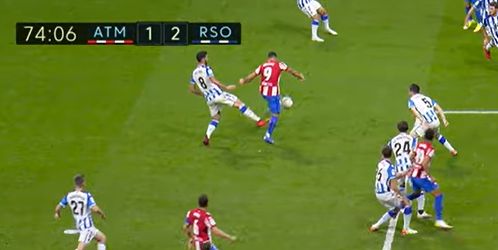 The incident in question

After the game, Merino was asked about the decision, and he said, as cited by Marca: “I am not going to lie to you. I touched him a little. The intensity is very low.

“He has already hit the ball. It didn’t appear sufficiently clear for VAR to look at it.

“Situations that VAR interviene are very clear. There is not enough intensity for Luis Suarez to fall in this way, that’s how it looks to me. He surely will say that this is a penalty.”