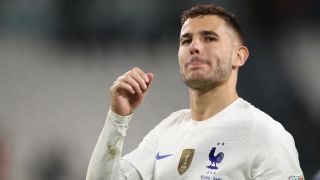 Lucas Hernandez has been instructed to return to Spain to complete a prison sentence by a judge in Madrid today.

The former Atletico defender now plays his club football with Bayern Munich, and has just won the Nations League with France.

After being accused of assaulting his girlfriend in 2017, the couple decided to take a honeymoon together, clearly violating the separation order handed down by the courts after the assault and the 6 months of effective “house arrest” they had been put under. On their return, they were met at Madrid Barajas airport by the police.

Now Lucas has been told to return to Spain to face charges of fleeing justice and breaking his order to stay close to home.

It seems unlikely he will actually have to serve any time, and he may not even be forced to return to Spain at all, but the story drags on, years after it began, with Hernandez’ never able to shake off the repercussions of his actions.