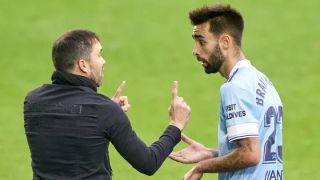 Most teams in La Liga have played 8 games now, so it’s a great chance to take a first look at the statistics each team is accumulating, to get an early read on how they’re playing.

Celta Vigo have not had a great start to the season – they have just two wins, against struggling Levante and Granada.

They look set for a relegation battle if things continue like this, but there are reasons to be hopeful.

The Galicians actually have the third highest possession stats in the league, after Barcelona and Sevilla. Of course possession on its own doesn’t win games, but it’s a sign that there is technical quality and some chemistry in the team. It’s a lot easier to turn a lot of possession into goals than it is to turn around a team that can’t hold on to the ball.

Eduardo Coudet is having a tough second season, but if he can just turn some of this possession into goals, things will be looking a lot brighter.