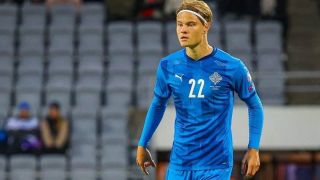 Eidur Gudjohnsen famously played for Iceland in the same match as his father, with one substituted for the other.

Could the family legacy be about to take a new twist?

Eidur’s son Anri plays for Real Madrid’s Castilla team, despite dad’s Barcelona connections, and is apparently close to a first team breakthrough at the Bernabeu.

AS report that an avalanche of goals for the youth teams, plus an impressive international break with the senior Iceland team, has convinced Carlo Ancelotti and his staff that he’s getting closer to first team standard.

The 19 year old starlet scored against Liechtenstein this week, off the back of really finding his groove for Raul’s Castilla team. AS describe him as a “tank” in his last game, winning and scoring a penalty and then another equaliser in a 2-2 draw.

Competition is fierce for minutes in Ancelotti’s team, but this is about as thin a Madrid squad as you’ll see, with plenty of minutes for youngsters on offer.

This may be the best chance Arni gets.