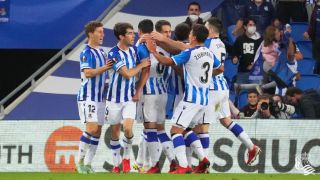 Real Sociedad welcomed Monaco to San Sebastian this evening in the second round of their Europa League campaign and drew 1-1. La Real drew 2-2 with PSV in the Netherlands in the first round, while tonight’s French opponents beat Sturm Graz 1-0 at home.

La Real are flying this season domestically, and sit second in La Liga at the time of writing. Real Madrid are a point clear of them, while Sevilla and Atletico Madrid – last season’s champions – are both two points short. Monaco’s start to the campaign hasn’t been so hot. They sit eighth in Ligue 1, three points off Marseille and the Europa League and 13 off league leaders Paris Saint-Germain.

Monaco struck first blood, taking the lead at the Reale Arena in the 16th minute through Axel Disasi. La Real drew level in the 53rd minute, when Mikel Merino scored after being assisted by Adnan Januzaj. The result leaves the Basque side in third place in their group with two points on the board; Strum Graz are next.