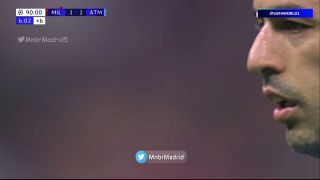 Watch: Luis Suarez fires Atletico Madrid into the lead at Milan in the 97th minute

Milan struck first, taking a 20th minute lead through Rafael Leao after the forward was assisted by on-loan Madrid man Brahim Diaz. The Italians, buoyed by the return of Champions League football to San Siro, started well. Atletico hit back, however, in the 84th minute. Antoine Griezmann scored his first goal for the club since rejoining from Barcelona. Then, Luis Suarez popped up in the 97th minute – the Suarez Zone – with a late winner.