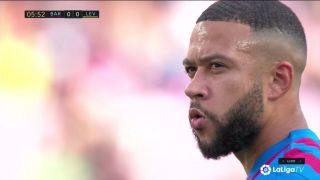 Just the start that Barcelona needed! 🔵🔴

Memphis Depay wins a penalty and then steps up to put it away 👏 pic.twitter.com/KCEBVJMnCp

They got off to a good start against Levante, however, taking the lead in the seventh minute through Memphis Depay, a bright light in a dull start to the season for the Catalan club. The Dutchman – very much Koeman’s man – won a penalty kick and then converted it himself to settle the nerves and put Barcelona ahead.