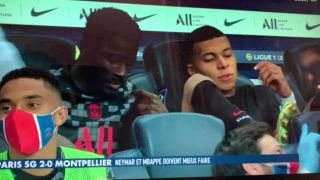 Watch: Kylian Mbappe filmed complaining to Idrissa Gueye about Neymar for not passing to him

Kylian Mbappe has been filmed complaining to Idrissa Gueye about Neymar according to Marca. The Frenchman was taken off by Mauricio Pochettino in the 88th minute of Paris Saint-Germain’s 2-0 defeat of Montpellier at the Parc des Princes, with the score at 1-0. Immediately after he came off his replacement, Julian Draxler, made it 2-0 after being teed up by Neymar.

Mbappe was seen on the PSG bench to be complaining to Gueye that the Brazilian hadn’t afforded him the same courtesy earlier in the match, pointing to an incident in the 66th minute. Mbappe was filmed calling Neymar a “clochard” – a term that literally means homeless but is generally used as an insult.

Mbappe to Idriss about Neymar :

“This beggar didn’t give me the pass” 😂💀

The chemistry of the PSG front three will be interesting to follow this season. Neymar and Mbappe have been the leading lights at the club since 2017, but now Lionel Messi has been introduced into the picture following his free transfer from Barcelona. Mbappe’s contract at the Parc des Princes runs until the summer of 2022, and Real Madrid have long been credited as holding serious interest in signing the forward.