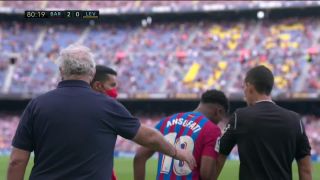 Watch: Ansu Fati returns for Barcelona against Levante after 322 days out injured

Barcelona host Levante at Camp Nou this afternoon in another crucial game for Ronald Koeman. The Dutchman is under serious pressure at Barcelona, at war with Joan Laporta and unable to build a coherent team that can fulfil the expectations that are part and parcel of a club as huge as Barcelona.

Barcelona got off to a good start, however, taking the lead in the seventh minute through Memphis Depay. The Dutchman – very much Koeman’s man – won a penalty kick and then converted it himself to settle the nerves and put Barcelona ahead. Luuk de Jong, his countryman and also a Koeman signing, then doubled their lead in the 14th minute with his debut goal for the club.

Barcelona's new No. 10 Ansu Fati is back after 322 days 💪❤️ pic.twitter.com/IAlXz4OiwA

A good day became a great one in the 81st minute, when Ansu Fati was brought off the bench to make his first appearance for Barcelona since he was injured against Real Betis last November. 322 days have passed since, and the teenager has even inherited Lionel Messi’s number ten shirt. Hopes are high for him.