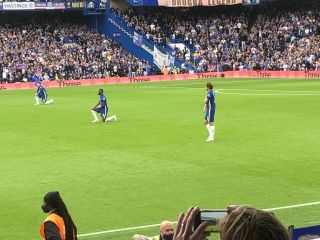 The result means that City have leapfrogged Chelsea in the table, and are now level on points with them as well as Liverpool – who have a game in hand and sit top – and Manchester United.

Marcos Alonso raised eyebrows before the game by deciding against taking the knee as Premier League players have been doing since after lockdown to protest against racism. The Spaniard, capped by La Roja, instead chose to stand and point to the anti-racism badge on his shirt. His argument is that the gesture has lost all meaning by becoming commonplace.

A narrow defeat this afternoon. pic.twitter.com/RO9nSdIQmc

Chelsea travel to Turin next up to take on underperforming Juventus in the Champions League. City are also on the road, heading to the French capital to take on Lionel Messi’s Paris Saint-Germain. The Argentine’s fitness is uncertain and whether he participates in the game or not will be decided tomorrow.