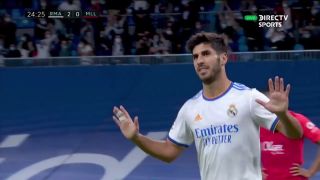 Watch: Kang-In Lee pulls one back for Mallorca against Real Madrid

Madrid started quick, taking the lead inside three minutes through the inevitable Benzema, who wore the skipper’s armband on the night. Marco Asensio, who used to play for Mallorca, then doubled Madrid’s lead in the 24th minute, only for Kang-In Lee to pull one back for the visitors from the Balearic Islands seconds later.