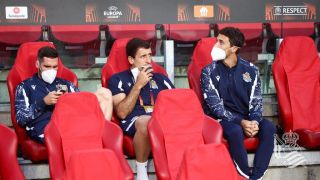 Real Sociedad get their 2021/22 Europa League campaign underway this evening when they travel to the Netherlands to take on PSV. The Basque side performed well in the competition last season only to take a hiding off Manchester United, so will be hoping to go deeper this campaign and maybe even emulate Villarreal and Sevilla, who won the previous two editions.

Mikel Oyarzabal starts and captains La Real, and is undoubtedly their marquee player. The man from Eibar represented La Roja at both Euro 2020 and the Olympic Games this summer. Other pivotal figures selected by Imanol Alguacil include intelligent midfielder Mikel Merino and Alexander Isak, one of the most interesting young forwards in the European game. David Silva brings experience and big-game nous to the side.