All eyes on Vallecas: Michel fighting for Getafe job against Rayo Vallecano

Four matches, four defeats, zero points. It’s a record that any coach would be concerned by. And when it comes following in the footsteps of a club legend like Jose Bordalas, your task is even more difficult. Michel came into a tough gig, and knew that he’d have his work cut out to change this team’s style, but it’s not going according to plan.

The transfer market sparked hope. The club recruited across the field, with Stefan Mitrovic, Jorge Cuenca and Jonathan Silva boosting the defence, Carles Alena, Jakub Jankto, and Florentino Luis adding to the midfield and Sandro Ramirez, Vitolo, JJ Macias and Dario Poveda strengthening the attack. With Angel Rodriguez, Xabi Etxeita and Marc Cucurella the only notable exits, the squad looked stronger on paper.

The optimism of pre-season has quickly disappeared. Talk of a cup run and a top eight challenge from Michel in pre-season has been replaced by hopes of avoiding relegation. A frustrating defeat at Mestalla in the opening fixture of the season was less than deserved, but was followed up by a last-minute loss to Sevilla and a result at Camp Nou which didn’t do justice for the fight put up against Barcelona.

What really hurt Getafe fans, what led to the whistles and chants of “Michel leave now”, was the home defeat to Elche. A second consecutive home fixture on a Monday night may not have helped the patience of those in the stands, but this was Getafe’s worst performance of the season.

Matchday 4, Getafe have scored 1 goal all season, on course for a 4th defeat in a row… and chants of “Míchel vete ya” already ringing around the Coliseum Alfonso Pérez 🤷‍♂️ pic.twitter.com/myGjJbPmue

The Azulones managed just one shot on target, coming in the 87th minute, in a shocking display. Losing key midfielder Mauro Arambarri to injury only fuelled the pessimism at the Coliseum Alfonso Perez. And the Uruguayan will now be missing for the club’s next few games.

Something needs to change, and as of yet, Michel has been reluctant to do that. He’s stuck to his line-up of three at the back, but that could be defended. The team have avoided conceding many, losing every game to date by a single goal and only conceding more than one at Camp Nou.

But the trouble comes in attack, where only one goal has been scored. Even as Michel has rotated attackers, he hasn’t changed the system, despite the difference in style between Jaime Mata and Sandro. Asking Mata, showing every sign of his 32 years of age, to press with the same intensity as Sandro or Enes Unal, is never likely to pay off. His drop off in performance shows. While Mata managed a shot every 53 minutes on average over 2019/20 and 2020/21, he’s averaging an attempt on goal every 84 minutes this season, and is yet to record a single one on target.

That means that all eyes turn to Rayo Vallecano. Getafe will be playing knowing that they risk going five games without a point, but that run could go on even further. Their next three fixtures after a trip to Vallecas involve welcoming champions Atletico Madrid, and then facing two sides competing in Europe this season in Real Betis and Real Sociedad.

The pressure is on for Getafe. They have won their last three of their last four meetings with Rayo and are unbeaten in the fixture for five years, but have only won at Vallecas in the league twice since 2004. It’s a mixed bag when it comes to meetings between these teams, and given the home side beat Granada 4-0 on their home debut, Getafe will be expecting the unexpected. 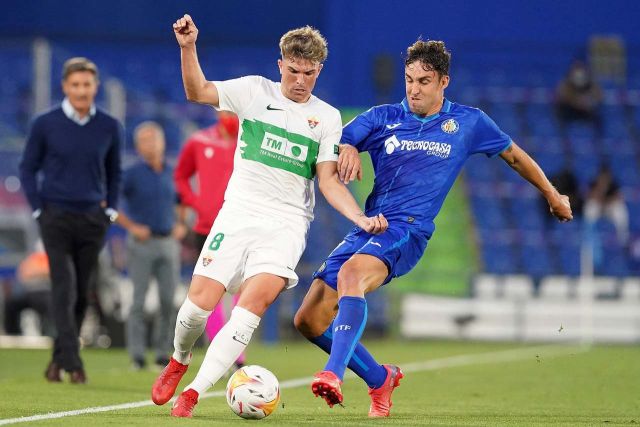 Some remain optimistic. It hasn’t been easy for Michel. In his first three matches of the season, Getafe have played three teams who remain unbeaten in Valencia, Barcelona and Sevilla, the former led by their former coach and the latter two among last season’s top four.

If we look at the figures, no other La Liga side is so wildly off their expected performance. Getafe remain one of only two sides yet to pick up a single point from four games played, but xPts suggest that they should have 3.01. From that, we would expect Getafe’s performances to start picking up goals and, more importantly, points.

It’s also true that he has the backing of his president, Angel Torres. There was contact between Torres and Michel in the summer of 2020, when Bordalas was first linked with Valencia, and he eventually returned to the club a year later. Such a long-term plan and pursuit is unlikely to come undone after just five fixtures.

It is undeniable, though, that time is running out for Michel. With a tough run of fixtures coming up, Getafe risk facing three of last season’s top eight while at their lowest point. Victory over Rayo Vallecano isn’t about guaranteeing Michel a job come Saturday evening, it’s about giving the team the boost they need to kick on. Even if it’s followed by three defeats, it gives Getafe something to build on. At present, that’s what they need.