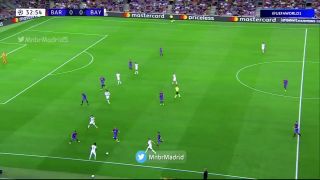 Luuk de Jong has just been signed from Sevilla on loan, the deal done on an active transfer deadline day that saw Antoine Griezmann leave Camp Nou for Atletico Madrid. Given Sergio Aguero, Ansu Fati and Ousmane Dembele are all out injured, he and his compatriot Memphis Depay will be key in attack for now.

Ronald Koeman started Marc-Andre ter Stegen in goal, behind a back three of Eric Garcia, Gerard Pique and Ronald Araujo, flanked by wing-backs Sergi Roberto and Jordi Alba. Sergio Busquets sat in midfield with Pedri and Frenkie de Jong either side of him, while Memphis and De Jong led the line.

MULLER WHAT A GOAL WHAT A SHOT pic.twitter.com/LeWteuGBm1

Barcelona fans, not exactly on the same page as UEFA, loudly whistled the Champions League anthem pre-game, and their team struggled to assert themselves on the game in the early stages. Thomas Mueller put Bayern ahead in the 33rd minute.