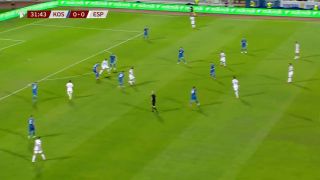 La Roja face Kosovo this evening in a crucial World Cup qualifier. Luis Enrique’s side are top of Group B, but have played two games more than second-placed Sweden, and given only the side that finishes first in each group is guaranteed a place in Qatar three points in Kosovo is a must. The pressure’s on.

One of the stranger elements to this evening’s clash is the political aspect. Spanish television will refer to this evening’s opponents as the team of the Kosovo FA, who come from the territory of Kosovo. This is because Spain refuses to recognise Kosovo’s independence due to their own burgeoning independence movements in the Basque Country and Catalonia.

🅰 vs Newcastle
⚽ vs Leicester
⚽ vs Crystal Palace
🅰 vs Georgia
⚽ vs Kosovo

On fire for club and country. pic.twitter.com/uHGBjg8N8l

Spain lost 2-1 to Sweden last Thursday in their first competitive game since they exited Euro 2020 after a semi-final defeat to eventual winners Italy at Wembley Stadium. They followed that up with a 4-0 hammering of Georgia, and went into tonight’s game with the hope of securing another uncomplicated victory; they certainly got things off to a good start, with Pablo Fornals putting Spain ahead in the 32nd minute.