The 18-year-old schemer has established himself as a first team regular at the Ligue 1 club during the last 12 months after making his club debut in January 2020 at just 16.

In 2020/21 he made 27 appearances in league action, with one goal and three assists, and his current transfer value is set at around €27m by Lyon.

The French underage international is under contract at the Groupama Stadium until 2023 but he is already looking towards his next career move in the coming years. 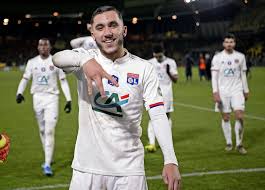 “The perfect path would be the following, make history with Lyon and then make it with other clubs”, he told an interview with Onze Mondial, reported via Diario Sport.

“We all know the club of my dreams is Real Madrid. To join the biggest club the world would be great.

“That is the perfect route and the one I have in mind. Every morning I wake up for that and to go on and fulfil my dreams.”

If Cherki does make a move from Real Madrid in future he will join a long line of former Lyon players to represent Los Blancos later in career.