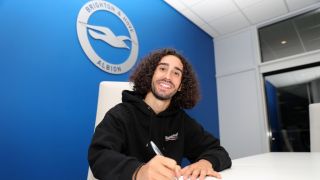 Marc Cucurella has been touted as a top talent since coming through the Barcelona academy, and Premier League fans will now get to see him in action after his move to Brighton this summer.

In his first interview with his new club he mentioned what he know about his new home – and it sounds like the dream of going back to the coast has really been sold to him.

He will soon find out that Brighton beach is a little different to Barceloneta. Let’s hope he at least gets down there before the rain starts.

You can see the amusing screenshot of the quote in the image embedded here: