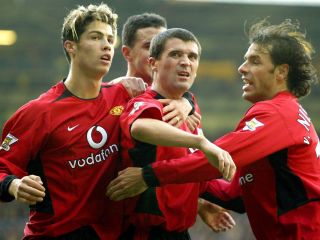 Roy Keane on Cristiano Ronaldo: “There’s no doubt in my mind that he’s still a world-class player”

Manchester United's post announcing the return of Cristiano Ronaldo has the most likes from any sports club at 12.5M and counting 🤯 pic.twitter.com/IdrKOtlHLl

As ever, where Messi makes headlines a certain Cristiano Ronaldo will never be far away. And so it proved this week. The Portuguese – who had a pretty good summer himself, winning the Golden Boot at Euro 2020 as Portugal made it to the last 16 – has left Juventus for his old club Manchester United for a fee in the region of €30m. Cristiano is two years older than Messi, and isn’t as fearsome a prospect any longer. But it’s still made waves.

Quite a wave, in fact. United’s tweet, where they announced the signature of the Real Madrid legend, has become the most-liked post from a sports team in the history of Instagram. It was at 12.5m late on Saturday evening, a remarkable achievement. Cristiano brings undoubted media interest and intrigue; Ole Gunnar Solskjaer and his team will hope he can deliver goals, too.

“I think it’s great news for United, for the fans, for the Premier League,” Cristiano’s former captain at United, Roy Keane, said regarding the transfer on Sunday afternoon. “There’s no doubt in my mind that he’s still a world-class player, and obviously you can discuss the pluses and minuses of it – some people might have doubts about him – but the hunger is there, the desire is there. We saw that at Euro 2020 he won the golden boot, the World Cup is a year-and-a-half away. That’s an incentive to keep going.

“He’s a clever guy; he’s only coming back to United to win stuff. I don’t think he’d be the difference to win the big trophies, but I think a League Cup or an FA Cup is more than possible, even though he’ll want more than that. He’ll bring a winning mentality to the dressing room, we all know he’s a fitness freak. I think he’s one of the most intelligent players I’ve seen in my life.”